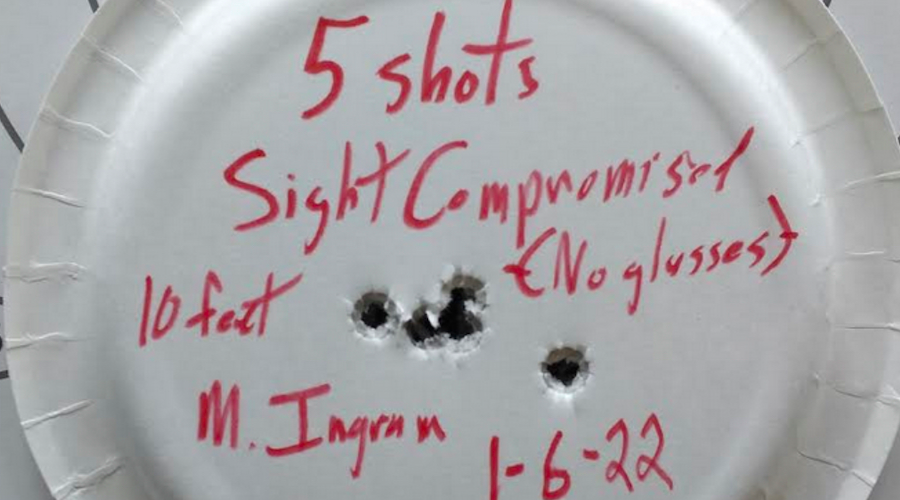 As firearms instructors, offering up realistic, relevant firearms training means first studying what REALLY happens in gunfights.  We look at individual and collective incidents to see what works, what doesn’t, what can be done better, best practices, etc.  One such gunfight that had a profound effect on training for both law enforcement and the private sector was the 1986 FBI Miami Shootout.

In 1986, the FBI got on the trail of William Russell Matix and Michael Lee Platt, who were suspected of committing bank robberies and other violent acts in the Miami Dade Area.  A group of FBI agents managed to conduct a forced (via collision) vehicle stop on Platt and Matix, at which point a gunfight ensued.  The gunfire was so intense that several of the FBI Agents (who were Vietnam Vets) stated that it was like being in Combat again.

The Special Agent in Charge, Ben Grogan, lost his glasses in the initial collision, got out of his vehicle, and from a distance of 8 feet, fired 6 rounds from his service revolver at Platt.  Grogan missed all six shots, at which point Platt shot him dead.  Grogan’s partner, Jerry Dove, managed to get one solid, lethal hit on Platt….but Platt kept fighting, and shot Jerry Dove dead.  Platt then went on to wound five of the agents surrounding him.  At this point, practically everyone was wounded, and struggling to reload their guns under fire.

The gunfight was brought to a successful conclusion by Special Agent Ed Mireles.  Rushing forward into the fight, Mireles was hit in the left arm by a shot from Platt’s rifle, which knocked Mireles to the ground.  Mireles then got up, rushed forward again, and using a vehicle for cover, operated and fired his Remington 870 shotgun one handed until the shotgun was empty.  Mireles then closed distance with Platt and Matix, and shot them repeatedly until his service revolver was empty, and the fight was over.  Ed Mireles became the first FBI Agent to win that agency’s Medal of Valor.

Lots of lessons came out of this fight, such as the ability to shoot, and reload while wounded, the need to keep shooting to vital areas until the threat is stopped, etc.  One lesson that hasn’t received the attention I think it should, revolves around Ben Grogan.  He was known to be an exceptional shooter, but like many of us, wore corrective lenses…. and used those corrective lenses to assist in his marksmanship abilities.  Losing those glasses suddenly in the fight put him at a disadvantage, and ultimately cost him his life.

Based on this lesson, when I taught law enforcement, I would set aside time each year (in addition to the regular qualifications) to do ‘sight compromised’ shooting.  In other words, if something in the fight changes the officer’s ability to see, how well can the officer still shoot?  This lesson is applicable not only to law enforcement, but to anyone who carries a firearm for self-defense.  What can affect your vision?  Losing your corrective lenses, sweat, blood or debris in your eyes, or particularly for law enforcement, O.C. Spray (aka pepper spray).

To train for this, since the purpose is self-defense, we first look at the distances that self-defense shootings actually occur.  According to the Black Label Report by the Modern Warrior Project, 50% of gunfights are 0-5 feet, with an additional 20% from 6-10 feet.  13% are 11-15 feet, so we can establish working from 10-15 feet as a reasonable training distance.

What is the desired level of accuracy for defensive shooting?  Generally, a hand sized group in the upper center portion of the chest.  We can replicate this with a 6 7/8 inch paper plate.

You can work either from the holster or from the hand, but fire five (5) shots at the paper plate, with your sight compromised in the manner described above.  All shots on the plate?  Good!  You can then begin pushing out the distance of the plate, firing 5 shots at each new distance.  This will help you see where your accuracy begins to taper off.  Are your shots not all on the paper plate…are they right or left?

To correct shots which are not centered, to include those low or high, you can use something I learned years ago at the Smith & Wesson Academy:  Using a marker, put a 1 inch dot in the center of the paper plate.  Using an empty pistol, face this target, look at the dot, then close your eyes.  Push the pistol out to full extension, then open your eyes to see where it’s pointed.  Left or right?  You can shift your foot position, then try this again…. until you are able to push the pistol out to full extension, open your eyes, and find it pointed dead center.  High or low?  I’ve found the culprit is usually head position…. when you extend the pistol, you extend it up and into the line of sight…DON’T duck your head to the sights of the pistol.  This is all about finding your natural point of aim. 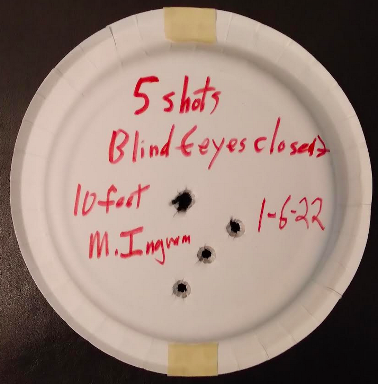 When you can extend out with an empty pistol, open your eyes and find the pistol pointed dead center, you can now do this live fire to verify point of aim/point of impact.  With a loaded pistol in hand at the high compressed ready position, look at the spot you want to hit on the paper plate.  Close your eyes, then extend the pistol out, and fire 5 shots.  Are they all on the plate?  If not, make the same corrections we made with the empty pistol.  For the sake of safety, I recommend doing this drill with a Firearms Instructor or Safety Officer present, or at least a training partner.  This drill can contribute directly to your ability to hit point of aim at self defense distances, even with your sight compromised.

Self defense pistol shooting also involves being able to reload under stress, and clear malfunctions.  Personally, I like training these at home with an empty gun and dummy rounds….and I do them ‘blind’ (with my eyes closed).  The idea is to be able to instinctively do these things by ‘feel’.

At Openrange, we are proponents of using sighted fire to the extend that you can, given circumstances.  While ‘sight compromised’ shooting doesn’t represent ‘the most likely’ scenario, history has shown us that it can in fact come in to play.  Ben Grogan’s situation was tragic, but I believe failing to learn from his sacrifice would be tragic as well.