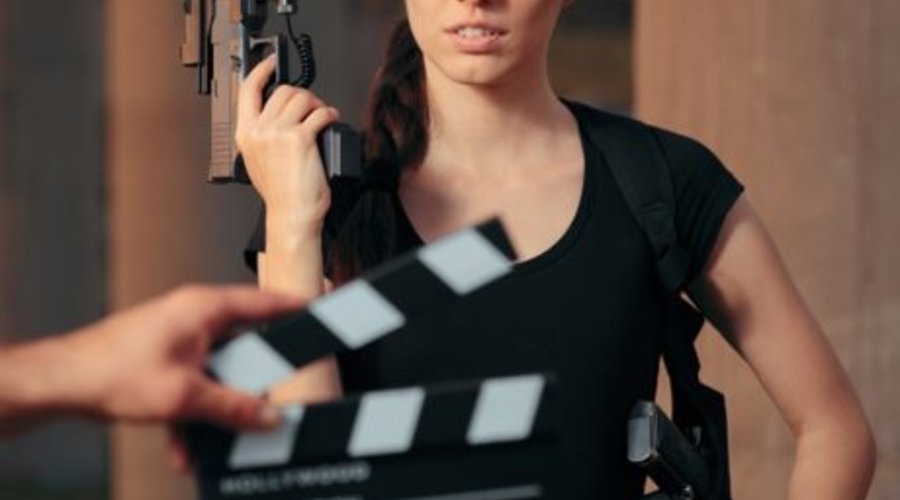 I LOVE a good story, and have long been an avid reader, but I enjoy a good movie as well.  As to the latter point, Hollywood has produced countless numbers of wonderful action, high drama movies, and firearms are quite often a big part of that action.  At the end of the day, it all makes for excellent entertainment.  Given that my background (and livelihood) revolves around firearms, it’s easy for me to recognize what Hollywood produces as being entertainment only.  For a great many people, what they see produced on the screen and in the media represents the sum total of their knowledge when it comes to firearms….and this can be problematic.

Although there are exceptions (depending on the producers/directors), Hollywood doesn’t mandate that actors have proficiency, or even working knowledge of firearms.  This is exacerbated by the fact that some actors have a disdain for firearms…. even to the point of being anti-gun.  YET, these same actors make movies (and millions) by running around playing ‘heroic’ roles with firearms.  I’ve seen actors portraying themselves as a ‘bad dude’ and a firearms expert…. yet it’s obvious by their firearms handling that they’ve never fired a live round….and in some cases, never even held a firearm.  Going further, they are often handling the firearm in a way that’s unsafe.  If this is just entertainment, then why is this poor firearm handling a problem?  Because to many, these actors have star power and credibility….and some viewers tend to try to emulate what they’ve seen on screen, but with live firearms.

Are there exceptions?  Yes.  In the movie ‘Collateral’ with Tom Cruise and Jamie Fox, Cruise was an assassin……and was highly (and correctly) trained for the role by Mick Gould, former British SAS.  I had the privilege of talking with Mick Gould for about an hour some years back, and he told me that in most cases, they are not allowed to train the actors:  As armorers, they simply hand them the gun.  Why was ‘Collateral’ different?  Because the producer Michael Mann is known for insisting on a higher level of proficiency and credibility for such roles.

This is not limited to modern action movies, but to many historical movies as well, such as westerns.  I spent 22 years as a competitive shooter, competing in modern action police shooting matches, but I also spent 17 years in Cowboy Action Shooting.  In that latter discipline, we exclusively used Old West firearms.  As a historian I’ve researched Old West gunfighters, their firearms, and how they used them.  What the old gunfighters preached is VASTLY different from what Hollywood portrays.

One method popularized by Hollywood when it comes to Old West gunfighting is the practice of ‘fanning’, meaning you are slapping the hammer of the revolver to make it fire faster.  It looks cool, right?  While the practice did in fact exist back in the day, it was looked down upon…. something that a fool would do.  The Old West gunfighters expressed disdain for the practice.  It’s akin to holding the gun sideways today:  It may look cool, but it’s not the best way to handle a firearm.  Another problem with fanning the revolver is that it is quite likely to break the action of the revolver…. unless the action has been reworked.  Why would someone want to rework the action?  So that they can fire blanks faster…. not for valid live fire.  I’m often very reluctant to let folks handle my Old West revolvers, because they almost without fail want to try to fan the hammer and then ask me “Is that how they did it?”

Going further, Old West six shooters generally (as the name implies) have a capacity of six (6) rounds.  This was prior to the days of transfer bars and rebounding hammers (internal safety features), so wise gunfighters back in the day carried the revolvers with five live rounds, and the hammer on an empty chamber.  Going into a fight, that empty chamber could be loaded if needed, but what this all means is that in a fight, the user could draw and fire five (or six) rounds.  According to Hollywood, however, fanning the hammer of a revolver can make it fire 15 times without reloading!

The misconceptions created by Hollywood cover modern firearms as well.  According to Hiram Maxim’s patent of 1909, he termed his device a ‘silencer’, and the ATF classifies them as silencers as well.  In the business, we call them ‘suppressors’, because they don’t silence the firearm…. the suppressors simply make them ‘hearing safe’.  For example, a 9mm round will generally go approximately 155 decibels.  Any sound at or above 141 decibels that is repetitive can damage the hearing.  A good suppressor can potentially reduce the decibels by 30, meaning you can reduce the report down to about 125 decibels:  It now becomes ‘hearing safe’…. but it’s still fairly loud.  Accordingly, we refer to the one’s on TV as ‘Hollywood quiet’.  It’s not a reflection of reality, but it’s the only exposure that many people have, so they generally think that a ‘silencer’ makes a gun ‘silent’.  It doesn’t.  Oh yes, suppressors are legal for private purchase and use, with the right paperwork (tax stamp) and background check.  This is quite common, but it’s not uncommon for someone to come into our store, see a suppressor and exclaim “That’s illegal!”

As someone who’s carried a firearm daily for 33 years, and who’s been a firearms instructor for 22 years, something that’s VERY important for me to practice and to preach is firearms safety.  It’s a big deal, and we push this in our training.  One of the primary firearm safety rules is to Keep the Finger OFF the trigger and outside of the trigger guard until you are ready to shoot.  If you don’t want the gun to go bang, then take the finger OFF the trigger.  Hollywood movies?  The ‘bad dudes’ who are supposed to be firearms experts tend to run around with their fingers on the trigger….and this is shown in movie after movie after movie after movie……..

So, what’s the solution?  Those of you who know me will not be surprised when I say the solution is training.  First, if you are an actor slated to go on a set and handle a firearm, you should receive a certain minimum level of training, with a big focus on Firearms Safety and Basic Marksmanship Principles.  If you are going to do an action role, then you should receive additional defensive firearms training from someone who specializes in teaching that…. especially in the discipline (law enforcement, military, historical, etc.) that you are trying to portray.

In short, if an actor is going to be tasked with potentially influencing a large audience (nationally and internationally) about firearms handling, they should at least be able to do so safely and correctly.

Michael Wells - 18 May 2022 @ 12:21
Great article! Yes, Hollywood has some interesting takes on firearms.
Guns always make a cocking sound if you draw.
Pistols always make a click sound when pulling the trigger in slide lock.
You always rack a round to show you mean business.
Always either running out of ammo or never running out of ammo.
Revolvers have at least 10 rounds.
You brandish a 1911 with the hammer down.
12 gauge shotgun can be fired with one hand.
Getting shot with a pistol causes instant death or long dramatic death.
Could go on and on. Tactics are horrendous.
Ivan J Schell - 17 May 2022 @ 01:55
Alec Baldwin would have potentially benefitted from an hour of safe gun handling training in "Rust".
Joe Beck - 17 May 2022 @ 01:44
Thank you Mr Ingram for a much needed commentary on novice gun handling. I have experienced sloppy and dangerous gun handling recently from people who own guns and have no idea how to handle them safely. Also have seen a number of gun owners who do not know how to use them effectively. Don’t know the basics. I wholeheartedly agree that training, basic training is necessary for gun owners to get the benefits of gun ownership and to avoid the sometimes catastrophic effects of ineptitude.
Jason Lee Ferris - 17 May 2022 @ 01:21
I also thought Keanu Reeves was exceptional in the John Wick series in his gun handling, reloading, aiming, machinations, etc... (never missing might be the outlandish part). I know he did some training with Taran Butler in basic 3-gun methods and I think it shows positively in the movies.