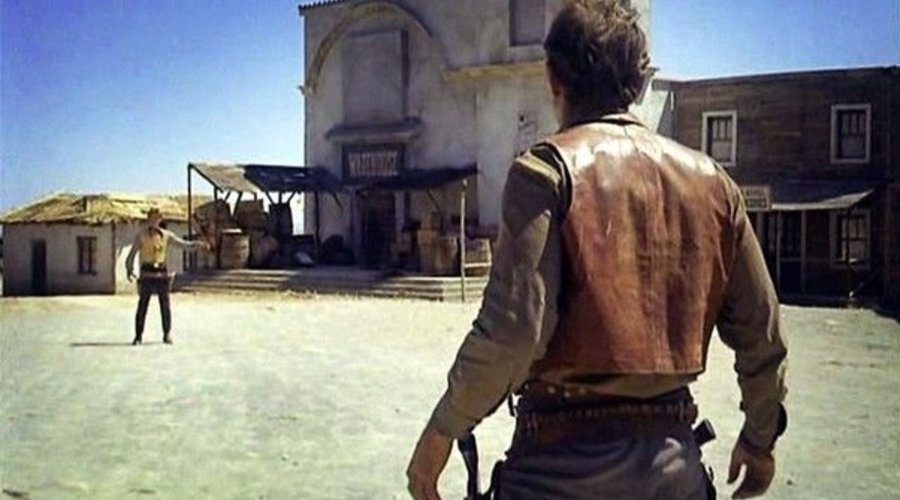 Gunfight SPEED - How Fast Do You Have to Be?

Gunfight SPEED - How Fast Do You Have to Be?

Imagine a scene out of the Old West; two men slowly walking towards each other from a distance, guns tied down low, spurs jingling.  Tumble weeds blowing down the street.  Shutters slamming shut as nervous town people hunker down and stay out of sight.  The two gunfighters stop, facing and eyeing each other with steely eyes, expressionless.  The anticipation builds.  Suddenly, hands slap for leather, and there’s the Boom of a shot!  The two men look at each other with one final, steely eyed glance, then one turns, takes two steps, then falls over dead.  The other spins his revolver back into his holster, then walks to the hitch rail to get his horse.  He slowly rides out of town and into the sunset, with town folk looking on in awe, and women looking at him with longing.  He’s a gunfighter, the stuff of legend.

I imagine that many would read the above paragraph and marvel at how awesome and exciting the Old West must have been.  As someone who has spent considerable time, effort and energy not only researching, but writing about the Old West, I CANNOT tell you that the above paragraph has any basis in reality.  However, the image portrayed in that above paragraph has been popularized by Hollywood, and in dime novels.  It is also firmly entrenched in the American psyche and has had a strong influence on what many think about when it comes to defensive firearms usage.  The reality is that those ‘great gunfighters’ that we see and admire in the movies are not gunfighters at all – they are just actors shooting blanks.  The ‘real’ Old West was somewhat different – and the way the real Old West Gunfighters articulated speed and accuracy was somewhat different as well.

The era that we call the Old West was the latter half of the Victorian Era, after the end of the Civil War, and before the turn of the century.  Specifically, this covers the years 1866 to 1899.  99% of the activity and historical figures that we look at as part of the Old West were in this time period.  Keep these years in mind, and factor in this:  Those tied down, fast draw holsters?  This design goes to a gentleman by the name of Arvo Ojala, and it was patented in 1953…. more than a half century AFTER our Old West Period.  Arvo Ojala made the holster specifically for Hollywood actors, and in fact, we refer to them as Hollywood Fast Draw Holsters.  The real gunfighters?  They didn’t wear the guns low…. they wore them high, and they weren’t tied down.  Ok….so what did the Old West Gunfighters think of ‘gunfight speed?’  Let’s look at some of their actual quotes:

“Fast is fine, but accuracy is final.” – WYATT EARP

“The most important lesson I learned from those proficient gunfighters (starting in 1871) was that the winner of a gunplay usually was the man who took his time.” – WYATT EARP

“Whenever you get into a ‘row’ (gunfight), be sure and take your time.  I’ve known many a fellow to slip up for shooting in a hurry.” – WILD BILL HICKOK

“If you get in a gunfight, don’t let yourself feel rushed.  Take your time, fast.” – CAPTAIN JOHN REYNOLDS HUGHES – Texas Ranger

“Levy downed his opponent, because he looked through the sights of his pistol, which is a very essential thing to do when shooting at an adversary who is returning your fire.”  - BAT MASTERSON

If we look at these quotes, we see that the Old West gunfighters did NOT put a premium on speed.  I tend to listen to my fellow gun owners both in, and out of online forums.  I would say that many people now days would say that SPEED is the most important factor….so let’s look at some modern incidents to put this into perspective.  The following videos can be found on YouTube.

In one video, officer’s respond to a domestic situation inside of a home.  A 5-year-old girl is sitting on the couch, and officers are talking to the family, and things are seemingly calm.  One officer takes note that there is a dog, and the dog barks and comes towards the officer.  The officer quickly draws his pistol and shoots, missing the dog, but hitting the little girl in the eye.

In another video, an officer is talking to a woman during a welfare check.  A dog near the woman charges, the officer draws his pistol and shoots, missing the dog, and killing the woman.  There is another video of a separate incident, but with the same result – an officer is trying to shoot a woman’s dog, but misses, and kills the woman.

According to the 2019, 132-page Black Label Report by the Modern Warrior Project, the stats are as follows:  50% of gunfights are 0-5 feet, with an additional 20% at 6-10 feet.  6.3 shots are fired on average, and duration is 5-9 seconds.  So, we see that the idea of a close-range gunfight with multiple rounds fired is still a reality, but why the difference in time?  Simply put, at the time that the 3-3-3 Rule was popularized, there wasn’t much video…. especially in comparison to now days.  However, video doesn’t lie, and 5-9 seconds seems to be what’s illustrated.  Part of that longer time is what I call the ‘human’ factor……recognition, acceptance, reaction time, etc.  With that said, if you can react and respond correctly in a shorter span of time (say 3 seconds), then that’s good.

So, teaching to operate successfully within the 3-3-3 Rule actually still makes sense, and by the time a student reaches our Self Defense Pistol Skills Level 4 class, they’ve reached this level of proficiency.  In our Close Quarters Pistol Skills Level 5 class, we look at ‘short cut techniques’….and we cut that 3 second time down considerably, but this is all with the caveat that speed is not the goal.  The goal is to be able to draw the pistol smoothly and cleanly from concealment at the right time and put fight stopping hits on target to save your life, and to do that under stress, and under a variety of conditions.