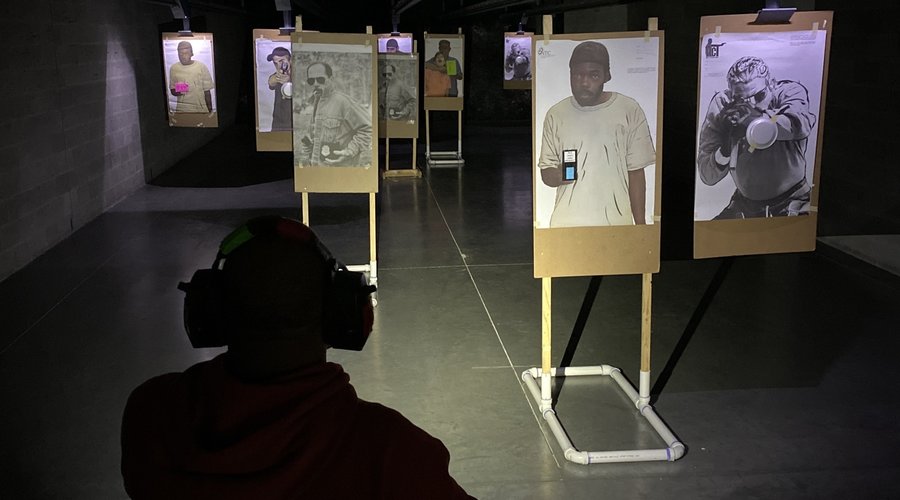 Openrange Defense: Does your training work?

As someone who carries a firearm for personal defense, how 'good' are you with your gun?  How do you measure that, and do you think it matters?  Yes?  No?

Read on.  One common standard in the training community is that used by armed professionals.  This generally requires shooting on a silhouette target...either something replicating a full size human, or a human torso at various distances, under moderate times.  The accuracy standard to pass such 'qualification' courses is usually 75%.  In other words, on a 50 to 60 round qualification course, 75% of those must be accounted for in the scoring area of the silhouette.  If you think about it, this means that missing 25% of the time is still acceptable (15 rounds hit something else!).  Depending on the agency, such qualifications are required to be shot once or twice a year as a standard to prove that the individual is 'qualified', meaning 'ready' to use that firearm defensively.

On the surface, this might seem like a reasonable standard, but consider this:  The FBI tracks armed (and other) use of force incidents by armed professionals and their data indicates that the current training trends/qualifications yields a 17 to 20% hit rate in actual gunfights....and this is corroborated by the Rand and Lott reports.  In other words, this means that they are MISSING 80 to 83% of the time, and tracking of these use of force incidents also indicate that unarmed people being shot is unfortunately not a rare occurrence.
Now, let's examine ANOTHER training standard.  Tom Givens of RangeMaster has trained thousands of students, and 65+ of those students have been involved in self defense incidents AFTER having received training from him.  Yes, this initially sounds excessive....but we usually go into the details of WHY/HOW this is in class.  The interesting point is that of 67 students, 65 won their gunfights.  Two were considered forfeits, as those two individuals didn't have their guns at the time of their fights (they didn't make it).  Of the 65 who were trained by Givens, and who were armed? ALL of them won their gunfights, none of them had any lasting legal implications after their gunfights, none of them hit innocent bystanders....and their hit rate is a documented, verified 95%!
How is this possible?  Tom Givens STARTS by having a higher training standards....smaller targets, pushing the envelope with time to hit them, and doing 'cognitive' drills...meaning that you are not just shooting, but you have to be able to 'think' with a gun in your hand.  As a testament to how much Tom's approach is respected, the FBI just revamped their training standards and qualifications...and bought Tom Givens to their academy to assist in that.
Personally, I'm fortunate to have attended several of Tom Givens classes...and what I've learned from him colors what I do.  So, when you attend our Self Defense Pistol Classes Level 3 and 4....and marvel at the higher standards....smaller targets, a HIGH accuracy requirement (100%), and 'judgment' required prior to pressing the trigger, you know that there is a 'method to the madness'.
Marlan J. Ingram