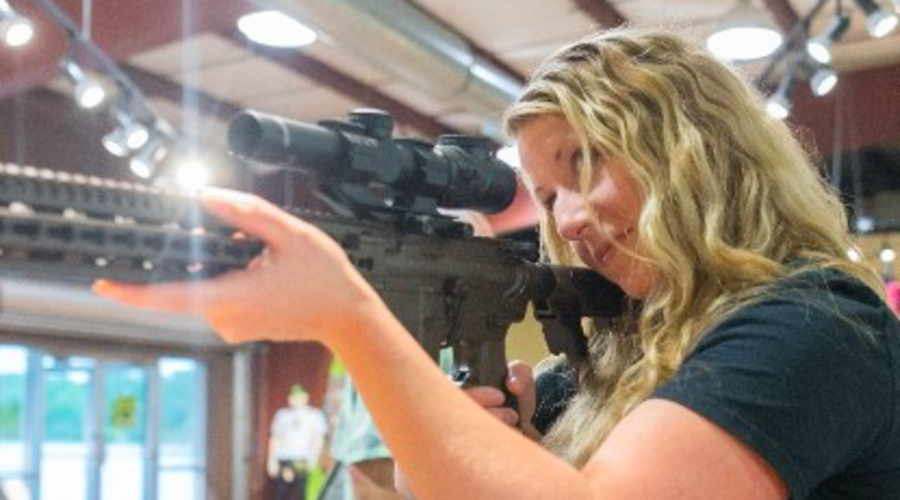 I’ve been the Director of Training at Openrange Sports in Crestwood Kentucky for going on eight years now.  One of the things I’ve observed over the last five years is that there has been a massive influx of new gun owners, and many of those have been women. It’s natural for new gun owners to have questions, but it’s also common for them to have misconceptions, and many of those misconceptions revolve around women and firearms.

My response to ‘What’s the best gun for a woman’ is this:  THERE IS NO SUCH THING.  When someone comes in looking for a firearm, we try to find the best gun for that person as an individual.  Gender is not part of the equation.  Let me outline our process:

If you are new to the world of firearms, we first suggest you take a Basic Pistol Safety Class.  That class will cover basic safety, to include safe methods of storage, basic marksmanship, how to maintain your firearm, and basics about the correct ammunition for your firearm.  Once you have this under your belt, we can assist you in choosing a firearm that fits your needs.  To do this, we ask you a variety of questions about how YOU intend to use the firearm, and then we can narrow the selection, usually to 4 or 5 firearms for you to test on the range.  Going further, we can even show you how to do a head-to-head objective test to see how each firearm performs for YOU.

If you look at the preceding paragraph, you will notice that no where do we mention, or alter the process based on gender.  I don’t believe in arbitrarily assigning a firearm to someone based on gender, and I can’t tell you which firearm is best for YOU.  However, we can assist, and show you how to choose for yourself.  The idea is that at the end of the process, you are a more educated consumer.

So, how does this process bear out in the long run?  Going through a Basic Pistol or a Concealed Carry class is one thing…it makes for a good start, but those classes don’t teach you HOW to defend yourself with a firearm.  For that, we have our Self Defense Pistol Skills series, and those classes will not only teach you, but will push you, your gun, and your gear……you will get to see what works, and what doesn’t.  With some of this more advanced work in mind….drawing from concealment, shooting, moving, engaging multiple targets, reloading and performing malfunction drills under stress – Do we see a difference in firearm selection between Women and Men?  At the end of the day, no we don’t.  Shooters of both genders will often start with a firearm that is too small, but after pushing the envelope with more advanced training, most will upsize.  At the end of the day, the most commonly used firearm in our advanced classes and practice sessions is the Glock 19.

Speaking of gender expectations, it’s not uncommon to see couples come in to train together, and truth be told, this is one of my favorite things.  In one of the Basic Pistol classes that we conducted, an older married couple attended, with an outcome that was one of the most heartwarming, touching things I’ve seen on the range.  On the line, they were in side by side lanes.  The lady was shooting Very Well….shots very closely grouped, dead center, and she was excited that she was shooting so well.  Her husband?  He WASN’T shooting as well, and was a bit frustrated (and maybe a bit embarrassed) that his wife was outshooting him.  We stepped in to bring him up to speed, but I think I’m the only one who really noticed what happened next:

The wife, noticing her husband’s distress, DELIBERATELY aimed (and hit) to the right, just outside of the scoring rings…..’allowing’ her husband to be the better shot.  I hid my smile, but it was awesome.  That’s love.

Craig Belling - 06 Mar 2022 @ 06:24
After taking the basic handgun safety class my wife selected her own handgun, turned out to be an ultra-light 5 shot .38; she loves it. I loaded it with light gallery loads for practice and gold dot hollow points for the drawer. She now has a W-92 in .357 and a 20 gauge.
Paul Hoks - 06 Jan 2022 @ 05:11
That is so sweet. I'll bet hubby deep down inside and in his mind knows has his back and who he can and will trust if anything goes down. Keep doing what you are doing.