Pistol qualifications are generally notoriously easy affairs.  In a concealed carry class, students will shoot at a full (human size) silhouette target.  In such qualifications, missing the target with several rounds is not necessarily cause for failure.

A Fresh Look at Pistol Qualifications

Pistol qualifications are generally notoriously easy affairs.  In a concealed carry class, students will shoot at a full (human size) silhouette target.  In such qualifications, missing the target with several rounds is not necessarily cause for failure.  In the state of Kentucky, the student will fire 20 rounds at the silhouette target and must have 11 hits to pass the course.  Law Enforcement qualifications are generally a bit higher, with a 75% accuracy rate required.  The Law Enforcement Officer will then be required to pass that qualification once or twice a year, throughout the officer’s career. In many cases, officers will rarely shoot outside of the required annual qualification.

I set out several years ago to take a fresh look.  I came up with several qualification courses which not only give a greater indication of skill but may also be utilized to foster skill development as well.

Our focus at Openrange is on training private citizens, so I first looked at the circumstances and distances of private citizen self-defense incidents.  One source of information that I relied on was the Black Label Report, which is a 132-page document by the Modern Warrior Project.  This report addresses the duration of self-defense incidents, the number of shots fired, and the distances of self-defense incidents. Specifically, it indicates that 50% of gunfights are 0-5 feet, with an additional 20% from 6-10 feet, and 13% are from 11-20 feet.  Accordingly, our training focus is on close quarters marksmanship.  Instead of trying to qualify with 75% on large targets (to include misses), our focus is on achieving 100% on smaller targets.

In looking at the actual physical skill sets needed, I determined that a private citizen carrying a firearm concealed must be able to draw the pistol smoothly and cleanly from concealment at the right time and put hits on target: We want enough accuracy to give us the best chance of stopping the threat, but we are also concerned with NOT hitting innocent bystanders.  Private citizens are responsible for every bullet that comes out of the muzzle of their firearms, so our accuracy requirements are admittedly higher than most qualifications.  I call this ‘Responsible Marksmanship’. Being able to reload the pistol under stress and fix malfunctions efficiently is also important.  I’ve put together several qualifications to measure the student’s ability to perform these skills, one of which is the 11 Shot Concealment Pistol Proficiency Drill. The drill is as follows: 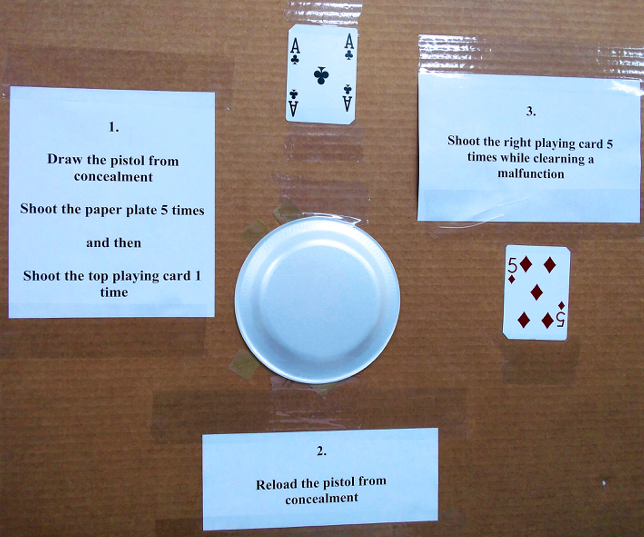 Do that with 100% accuracy within the specified time limit, and you pass the qualification.  Great! – but…there’s more to the story.

Shooting the drill with 100% accuracy in 20 seconds* is a START.  After you pass, my next question to you is, how come you didn’t do it in 18 seconds?  Once you do it in 18 seconds, how come you didn’t do it in 16 seconds?  In other words, the drill can be utilized as a training tool to measure efficiency.  20 seconds is good, but if you can do it in 15 seconds with the same level of accuracy, it’s more efficient.  If you shoot it in 14 seconds but start to miss, then the next question is WHY did you miss….and your training focus is now on fixing what lead to that miss…sometimes it’s improving the reload, or making the malfunction drill more dynamic, or acquiring/using the sights quicker.

This, and other drills that we’ve developed along these lines are designed to push the student to the edge and illustrate what each student needs (as an individual) to improve.  We’ve trained with these methods for several years now, and we have students who can REALLY perform with their defensive firearms.  We’ve found that achieving excellence in small things makes the ‘big things’ easier.

NOTE:  Our focus is on close quarters defensive marksmanship.  However, this drill is not our only qualification, it is a sample, and we incorporate various training distances where appropriate.